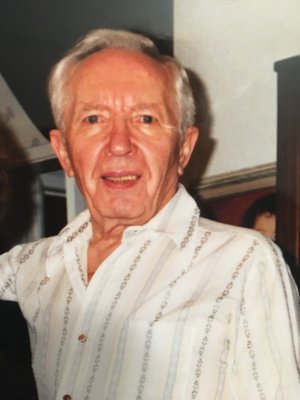 "Vladas Kilius passed away at the age of 95. Born in Lithuania, he and his family were forced out by the Soviet and Nazi fronts during World War II. He eventually ended up in a displaced persons camp in the Alps in Austria where he met a young lady Irene. After the war, he briefly spent time in England before making his way to Canada where he had family who could sponsor him. He valued education and learning, and studied electrical engineering to gain skills for better paying jobs. Eventually, he reunited with the young lady Irene when she visited from the States. They soon married, lived in Brooklyn, New York, had two daughters, Rita and Adria, and moved to Queens, NY. He had artistic talent and worked as a draftsman at Dialight where he spent the rest of his work life until retirement. During retirement he re-discovered his artistic talents. In his home hang many of his charcoal drawings and paintings.
Although he was often quiet and reserved, he loved to share many stories about his time in Lithuania and Austria during the war. His dry sense of humor was often accompanied by a twinkle in his eye. He also enjoyed playing video games particularly the ones that involved more strategy and focus. As an avid amateur photographer he created numerous photos and picture slides. He excitedly looked forward to watching the Olympic games, especially eager to watch the Lithuanian basketball team play. He will be missed dearly and remembered always."

Share Your Memory of
Vladas
Upload Your Memory View All Memories
Be the first to upload a memory!
Share A Memory
Send Flowers