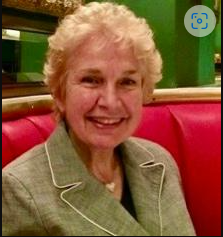 Please share a memory of Rosemary to include in a keepsake book for family and friends.
View Tribute Book
Rosemary Haigh’s family came from Woodside and moved to Elmont in 1950, where she lived until her passing on August 6th. She loved the community and participated in The Elmont East End Civic Organization. During her free time, she spent many hours in Southold taking walks and enjoying nature. She attended Sewanhaka HS, becoming the class president, a job that she loved and continued as an alumna, planning class reunions over the years. Rosemary became a French teacher in the Sewanhaka CHSD, teaching French primarily at Elmont HS. For her BA and MA, she attended Saint John’s University and then won a Fullbright Scholarship which permitted her to study at the Sorbonne in Paris, France as well as teach English as a Second Language. It was in England that she met the love of her life, Ian, her late husband. Although she didn’t have children of her own, she became a mother to hundreds of her students. Rosemary had a very big heart and went out of her way to help anyone in need. Once she retired, she volunteered at the Mary Brennan Inn in Hempstead teaching English as a Second Language. Her passion was directed toward helping animals and protecting the environment. She was an active member of the East End Civic Association and both she and Ian shared this devotion. They took in many animals over the years and found homes for many more. Donations can be made to ASPCA Guardian in her name. Rosemary and Ian spent several weeks each winter visiting Ian’s family in Tasmania, Australia. It held a warm place in her heart. As an educator, Rosemary was the President of the American Association of French Teachers for many years. She was the National Honoree in the Disney Salute to the American Teacher and won the American Association of Teachers of French, “National Secondary Teacher of the Year”. Rosemary was the author of a variety of Foreign Language books for Proficiency Press, dedicated to learning French communicatively. She will be remembered fondly by family, friends and the community.
To send flowers to the family or plant a tree in memory of Rosemary Haigh, please visit Tribute Store
Saturday
10
September

Share Your Memory of
Rosemary
Upload Your Memory View All Memories
Be the first to upload a memory!
Share A Memory
Send Flowers
Plant a Tree