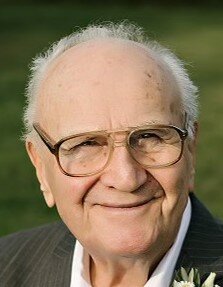 Please share a memory of Anthony to include in a keepsake book for family and friends.
View Tribute Book
DiLauro-Anthony V., (Andy) of West Hempstead- 6/27/1929-8/12/2022, 93 years old, passed away with his family by his side, after a recent stroke and complications of Dementia and Parkinson’s. Andy was married 51 years to his wife Marion, she passed away in 2006. He is survived by his four children, Guy (Linda), Nancy (Dennis), Karen, and Anne, who was his constant caregiver after Marion passed. Andy also had 6 grandchildren that he adored, Katie (Ryan), Andrew, Brian, Michael, Christopher, and Gabby. Lastly, he had become a Great Grandfather in 2021 to his best little buddy, Charlie who brought him such joy in the last year. Andy was born in Brooklyn, NY to Francis DiLauro who immigrated from Bari, Italy and Angelina(nee Romano) of Farmingdale. He was one of seven children and the last surviving family member. Andy met Marion at a midnight bowling league, since they both worked the night shift Sperry LTD. They were later married in 1955 and started their family a year later. After returning from active duty in occupied Germany during the Korean War (Army), Andy went to Pratt Institute and studied architecture. He worked for companies, the Spector Group and Weidersum Associates. During his career he worked on and headed some of the most iconic buildings built here on Long Island and NYC he took great pride in his work though the “companies” got the accolades, it was the unsung heroes like Andy who got these projects done from conception to the beautifully finished buildings. A few of the projects were the boat-like structures of Jericho Plaza (can be seen from the LIE), the Allstate headquarters in Farmingville, now known as Brookhaven Town Hall, and the now defunct Parr Meadows Racetrack in Yapank, most known for having the 10 year Woodstock reunion in 1979, with many of the original bands appearing. One of his last and favorite projects was lead project architect for the RXR Plaza Reckson EAB in Uniondale, as well as many public schools in the NYC school system. Though Andy was proud of his career, nothing was more important than his family, friends and neighbors. Andy was generous and always giving of himself to anyone in need. He was a Dad that coached baseball, taught his kids to ride bikes and drive cars, swim and instilled in his kids to be good people. He made simple things like a drive on a Sunday special with an ice cream stop before going home. Though he had a modest income, he always made sure there was a family vacation every year, and birthdays and holidays we special. As one of the kids who grew up in the DiLauro family, I can honestly say my childhood rocked! WE LOVE YOU DAD!!! His family will be receiving visitors at Krauss Funeral Home, 1097 Hempstead Tpke, Franklin Square, NY (516)352-2080 on Sunday 8/14/22 2-4 pm and 7-9pm. Service will be at Kraus and burial will be at Holy Rood Cemetery on 8/15/22 2:00 PM. The Family requests instead of flowers, donations to The Michael J. Fox Foundation | Help Speed A Parkinson's Cure
To send flowers to the family or plant a tree in memory of Anthony DiLauro, please visit Tribute Store
Sunday
14
August

Share Your Memory of
Anthony
Upload Your Memory View All Memories
Be the first to upload a memory!
Share A Memory
Send Flowers
Plant a Tree